GT Investigates: Higher infection and mortality, increasing ethnic violence, unemployment, and deep-rooted racism in the US deprive minorities of a present and a future

Western countries, one by one, have scrapped their COVID-19 restrictions and purported to be ready to “return to normalcy.” Yet, as the coronavirus continues to mutate, from the deadly Delta variant to the more contagious, milder Omicron variant, what can such a rush to reopen really bring to the West in the post-pandemic era? Analyzing data and talking to epidemiologists, the Global Times conducted a series of investigations into what consequences the vulnerable groups, including the elderly, the minorities and children, would have to bear when their countries ease COVID-19 restrictions, and what impact such moves would wreak on the medical systems of these countries.

This is the fourth and last installment, looking into the shocking impact of the US’ easing of anti-epidemic restrictions on the country’s ethnic minorities.

What awaits the minority groups living in the US during the COVID-19 pandemic period: a greater risk of exposure to coronavirus due to working and living conditions, less access to medical care, job loss because of the stagnant economy, a greater risk of death cause by a low vaccination rate and a higher risk of encountering racial violence… All these are not assumptions but the reality confronting hundreds of thousands of native Americans, African Americans, Latinos and Asians living and working in the US and these issues are bound to cast an even larger shadow in the future of minority groups, possibly even affecting their next generations.

On May 12, US President Joe Biden said the country was marking “a tragic milestone” of 1 million deaths of COVID-19 and each death was “an irreplaceable loss.”

The ethnic minorities in the country turned out to be the most heavily afflicted by the epidemic because of the US government’s total failure in dealing with the emergency and the deep-rooted racism in American society.

US scholar Thomas Sowell writes in his 1981 book Ethnic America: A History, “Color has obviously played a major role in determining the fate of many Americans.” In the face of the ravaging COVID-19 pandemic, the US has “laid flat.” While COVID-19 deaths have been reported across all age and ethnic groups in the US, data showed that the country’s minorities suffered the most infections and deaths.

Moreover, minorities have had to face greater financial burdens, higher unemployment rates, increasing violence, a reprise in discrimination and even a large number of orphans. Ethnic minorities in the US are facing not only worse survival odds but also a dark future as the US government is unable to defeat systematic racism, analysts warned.

“COVID-19 has shone a bright light on our own society’s failings,” Anthony Fauci, the immunologist who leads the COVID-19 response in the US, said during a graduation ceremony for Emory University in May 2021. The expert pointed out that the “undeniable effects of racism” have led to unacceptable health disparities that especially hurt African-Americans, Latinos and Native Americans during the pandemic.

Fauci’s words have been proven true by appalling numbers. According to data from the US Centers for Disease Control and Prevention (US CDC), overall – particularly in the early stages of the pandemic in 2020 – black, Hispanic and Native American populations experienced higher rates of both infections and deaths.

By analyzing data from the US CDC, the APM Research Lab also found that among all the deaths, indigenous Americans continue to suffer the highest rates of loss – one in 220 indigenous Americans have died, which means 454 deaths per 100,000 and the true mortality rate for this group could be around 34 percent higher than figures in official reports.

Nationwide, black Americans have experienced 14.3 percent of all deaths, while they represent 12.9 percent of the population of known races. For every 100,000 Latino Americans, about 262 have died from COVID-19, according to the report.

The higher infection and mortality rates among non-white people in the US highlight the inequality in access to medical resources between white Americans and ethnic minorities, Zhu Ying, a professor from the Baize Institute at Southwest University of Political Science and Law, told the Global Times.The whites and the elites enjoy better medical care and related insurances, making them the group with the lowest rate of infections and the highest chances to get quick treatment when infected. At the same time, the majority of the US citizens belonging to minorities have only basic medical care and may find it difficult to find hospitals for novel coronavirus treatment or get a doctor to have the specific medicine, let alone affording the medical fees, Zhu noted.

African Americans, Hispanics, and some Asian populations, when compared with the white Americans in the US, appear to have lower levels of health insurance coverage, with Hispanics facing greater barriers to health insurance than any other group – such as unequal access to medical resources. These inequalities have long been criticized by Americans and human rights activists, but the problem has remained unsolved.

Most minorities tend to be exposed to more infectible environments because of the specific low-end or middle-end jobs they hold, or because of long commutes to work that often include the use of public transportation. They also live in places with larger residential density, which means a higher possibility of cluster infections, Diao Daming, an associate professor at the Renmin University of China in Beijing, told the Global Times.

For example, a report released in November 2020 by the Institute for Health Metrics and Evaluation, an independent global health research center at the University of Washington, showed that working-age Hispanic, Latino, and non-Hispanic black Americans are more likely to die from COVID-19 than non-Hispanic white Americans in the same age group, suggesting that the excess risk may be disproportionately affecting individuals who are unable to work from home, according to the report. 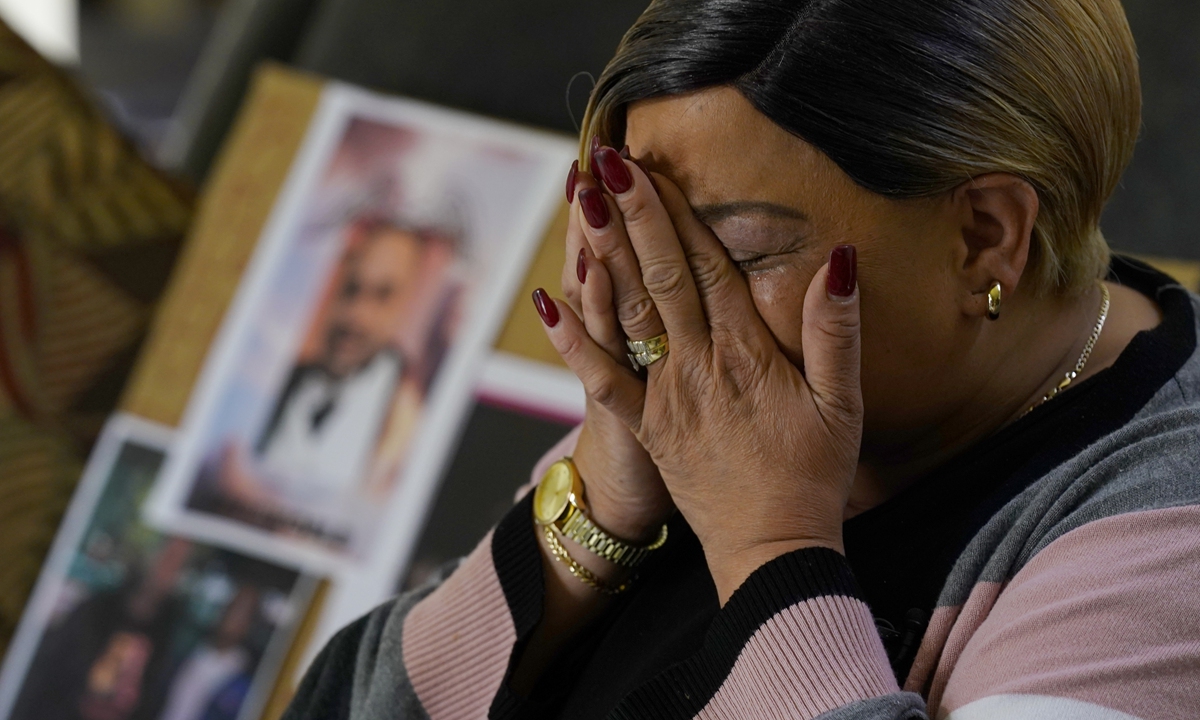 Higher risks for infections and deaths are not the only problem that ethnic groups in the US have to worry during the pandemic as the minorities, especially Asians in the US, have been facing increasing violence and discriminations.

Statistics released by the New York City Police Department on December 8, 2021 showed that anti-Asian hate crimes in the city has risen by 361 percent since 2020, when the coronavirus pandemic ran rampant in the country. Discriminations toward Asians, African Americans, Latinos, multiracial adults, Hawaiians and Pacific Islanders have also increased during the past two years.

Some Asians living in the US reached by the Global Times have said that due to increasing reports on crimes targeting Asians, less of them have chosen to take the subways and many had to be on high alert when going outside. Some noted that US politicians’ manipulation of public opinion during the coronavirus pandemic was the direct cause of the increasingly rampant racial discrimination against Asian Americans.

Instead of taking effective measures to deal with the coronavirus, former US president Donald Trump and some US politicians exploited the country’s preexisting racial issues with the purpose to shrink their responsibilities: They used the words “China virus” or other names that falsely accused China of being the pathogen’s geographic origin. This led to a rise in racist sentiments toward Asian Americans of Chinese or other East Asian origins, making them suffer from various kinds of racist attacks featuring malicious defamation, denial of service, or brutal violence, analysts said.

All these problems are ultimately rooted in white supremacy, which is embodied by the racial structure and social atmosphere of the US, the China Society for Human Rights Studies noted in a report released in April 2021.

A future being stolen 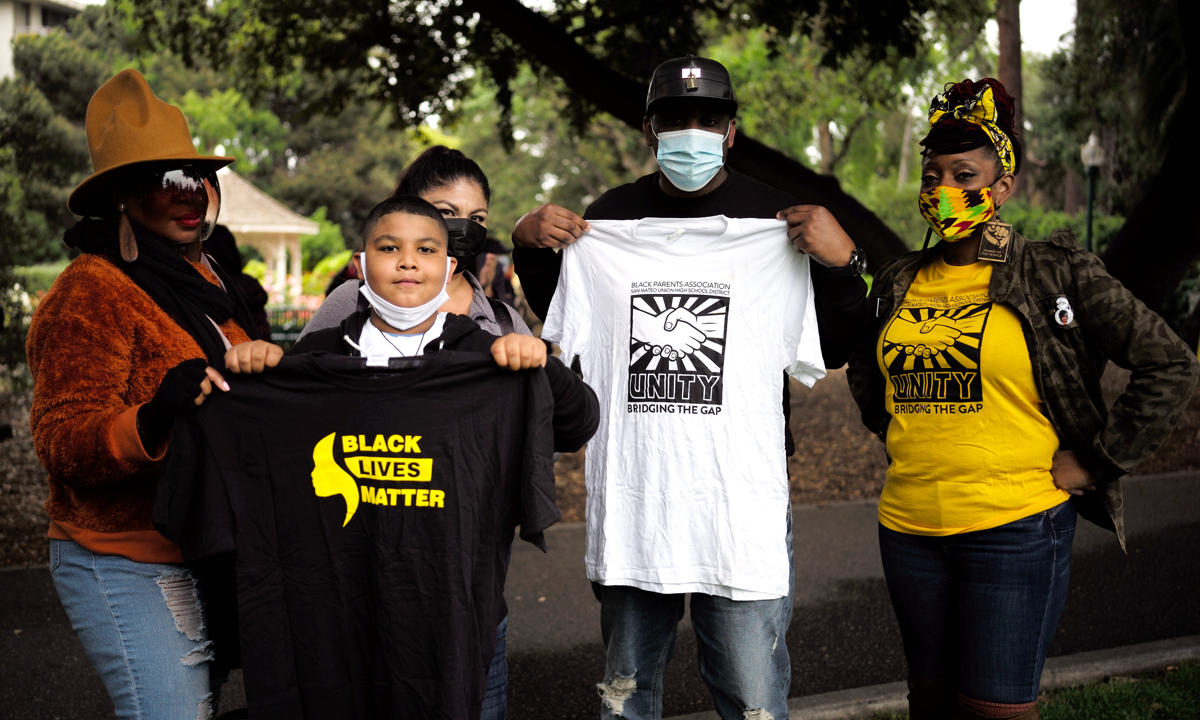 Biden announced the tragic 1 million deaths of COVID-19 with the purpose to turn over this page and called for Americans to look forward, but 1 million is not only a number but the figure represents real human lives, and the COVID-19 impact on minority groups may last longer, Zhu said. Zhu noted that in the long run, the pandemic has deepened the gap between the ethnic minorities and the white population in the US, not only on culture, but also on political matters, further splitting the US society.

The racial wealth gap in the US has been highlighted during the pandemic and with a sluggish economy and higher unemployment especially among the minorities, these will suffer more, analysts said, citing an early report from the Pew Research Center in 2019 which showed that job and wage losses due to COVID-19 have hit Hispanic adults the hardest.

Moreover, due to the US government’s failure to combat the epidemic, some 200,000 US children were orphaned by COVID-19, according to an Atlantic Monthly article. Children of racial and ethnic minorities account for 65 percent of those who lost a primary caregiver.

Even experts in the US say that most of these orphans have very few opportunities to change their fate as most of them live at the bottom of the society. The risks of dropping out of school, drug abuse, and violence are likely to follow them throughout their lives and they may also be deprived of a bright and successful future because of the racism problem in the US.

Racism is deeply ingrained in American society. Systemic racial discrimination still remains despite the abolishment of slavery and the empowerment of suffrage. It is the whole white society that is enslaving minority groups, Diao noted.

All indicators through history have showed that there is a clear economic gap between the white and the ethnic races in the US. Unfair welfare systems to different races have been maximized against the backdrop of the pandemic and will further lead to gaps in other fields, said Diao.

Diao warned that the pandemic will tend to intensify the racial contradictions and to bring more discriminatory crimes and violent behaviors toward minorities. Moreover, the two parties may further hype the racial conflict to win more votes rather than endeavoring to solve the existing problems, thus the US society will enter a vicious cycle between identity politics and racial discrimination.

The pandemic is also like a mirror that has fully unveiled the US’ hypocrisy and racism and it is getting harder to fool the public using outdated rhetoric and to make Americans unite again, Zhu said. Zhu noted that in the face of the escalating racism and human rights violations, the ethnic minorities’ voice still cannot be fully heard in the US as the mainstream media are in the hands of a small elite group. 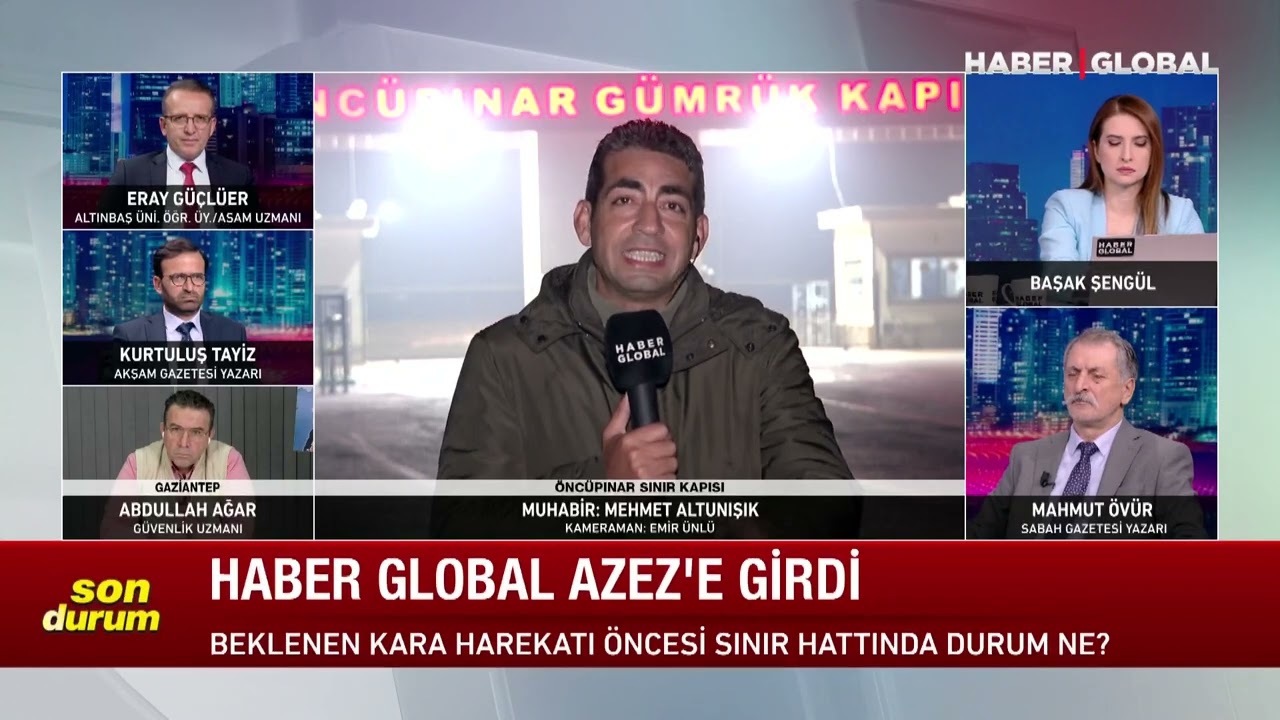