‘Omicron just a big flu’ a misperception; some in West attempt to delude Chinese public

Workers load daily necessities at Lhasa Railway Station on April 10, 2022. The materials are contributed by the people of Xizang (Tibet) Autonomous Region to support Shanghai and Jilin Province which are fighting against the COVID-19 epidemic. Photo: VCG

Hyping the “over-simplified” notion that “Omicron is just a big flu” recently served as validation for some to prompt China to ease its COVID-19 restrictions, while epidemiologists have used data and facts to rebuke the many fallacies of this claim, including higher death numbers from Omicron compared to the seasonal flu, and even higher than the more lethal Delta variant.

Experts believed that hyping this falsified notion is a trick used by the some in West to delude the Chinese public and attempt to weaken China’s adherence to the zero-COVID strategy, which could easily cause havoc in Chinese society. They believe the dynamic zero-COVID strategy is still best suited to China’s situation, and the country will walk out of the pandemic paying a minimal price and sacrifice.

China reported 1,351 new confirmed coronavirus cases on Saturday, with the number of new asymptomatic cases standing at 25,111. The financial hub of Shanghai, which has been fighting its worst wave since the pandemic began for more than a month, reported 1,006 confirmed cases, and 23,937 silent carriers on Saturday.

South China’s Guangzhou reported 10 new cases on Saturday. The city launched citywide testing of its 15 million residents on Saturday, believing that the virus may already be transmitting within communities. The city urged residents to stay put and avoid gatherings.

Officials from Northeast Jilin Province, a previous COVID-19 hotspot, announced on Sunday that the province will gradually resume pre-COVID work and life routines on condition that secure pandemic prevention is in place, after the cities of Jilin (namesake of the province) and Changchun, which were worst hit by the outbreak, announced they had curbed viral spreading within communities.

China is now fighting its most severe COVID-19 outbreak, driven mostly by Omicron and its sub-variant, in two years, with caseloads ballooning since March. The country reported 176,455 cases from March 1 to April 5, spreading to 29 provincial-level regions, according to National Health Commission (NHC) officials. A total of 197 severe cases in China were reported from January to March this year, said Wu Zunyou, chief epidemiologist of the Chinese Center for Disease Control and Prevention (CDC).

Some in the West and some self-media in China saw this small proportion of severe cases as vindication of the claim that “the risk of Omicron is equal to that of seasonal flu,” and began to hype the possibility of China easing its COVID-19 restrictions.

However, epidemiologists called it an “over-simplified notion to delude or mislead the public.” 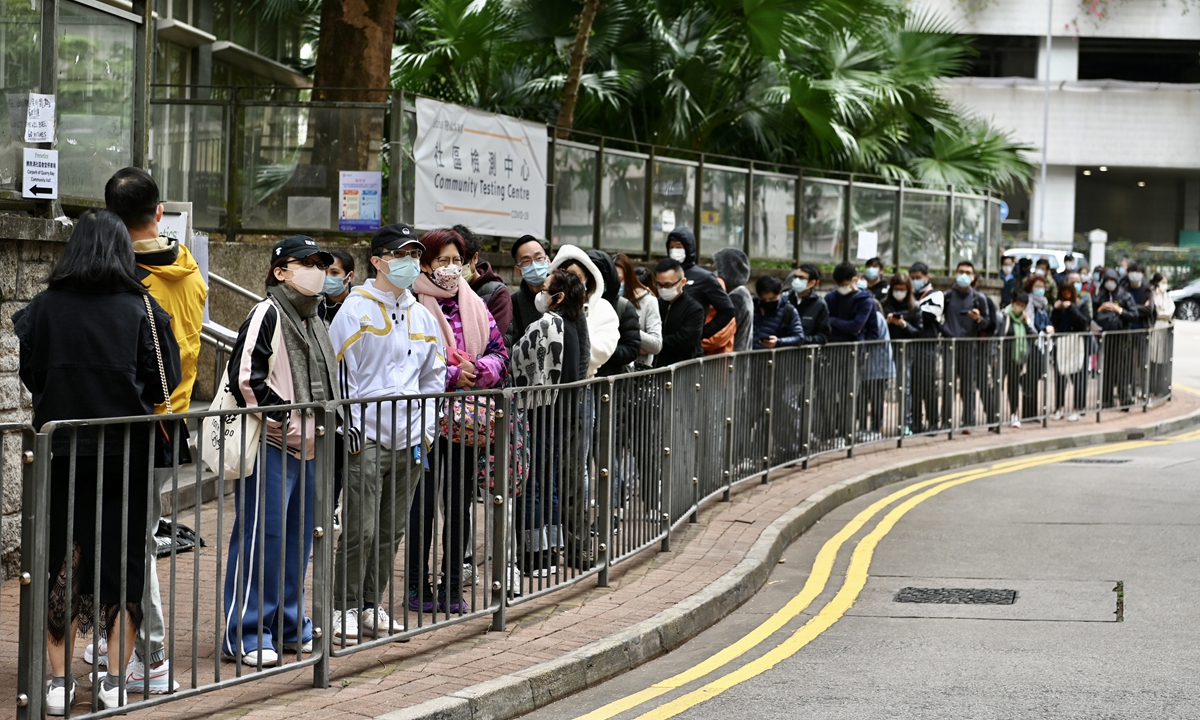 Hong Kong residents line up to take nucleic acid tests as the city battles an outbreak of the COVID-19 Omicron variant. Photo: cnsphoto

China has seen a relatively small number of severe cases from the Omicron outbreak because we rounded up all patients and gave them timely treatment, Wang Guangfa, a respiratory expert at Peking University First Hospital, told the Global Times, noting that the number would soar if restrictions are lifted, overwhelming hospitals and resulting in many patients struggling to get treatment.

Wang Guiqiang, an advisor to the National Health Commission and director of the Infectious Diseases Department at Peking University First Hospital, made reference to the 0.7 percent mortality rate in Hong Kong, which is much higher than that of seasonal flu, normally seen at 0.01 percent.

Lo Wing-hung, proprietor of Hong Kong-based newspaper Bastille Post, also told the Global Times that the idea that “Omicron is just a big flu” is misleading. “I have checked the seasonal flu deaths in Hong Kong in different years. In the year of a flu outbreak, the number of deaths due to the flu in a year is probably 100 to 300. The number reached 352 from 2018-19. Now 300 people have died [due to COVID-19] in Hong Kong in one or two days. The cumulative deaths from this round of the epidemic has exceeded 8,400. Some people said COVID-19 is like the flu, but I don’t agree at all.”

An analysis published by scientists who advise Japan’s health minister revealed that the Omicron strain of COVID-19 is at least 40% more lethal than seasonal flu, underscoring the potential danger of lifting pandemic curbs too quickly and underestimating the virus’s ongoing health risks.

Seeing the severity of Omicron and its subvariant, many countries that had already let their guard down have now veered back or are planning to change track after seeing a surge in cases.

Germany, for example, made a U-turn on April 6 when Health Minister Karl Lauterbach announced that the country will not end mandatory isolation for most people who catch COVID-19, reversing course after concerns were raised that lifting quarantine restrictions would suggest the pandemic was over.

“Coronavirus is not a cold. That is why there must continue to be isolation after an infection,” Lauterbach said on Twitter, adding he had made a mistake by suggesting an end to mandatory quarantine.

According to data from the UK and the US, the Omicron variant caused more deaths than the previous Delta variant if counted in the same time period, Wu Zunyou from CDC said at the press conference last week.

Currently, the Omicron subvariant BA.2 raises many uncertainties, as it has become the dominant variant in the US and Europe. In the US, for example, the rate of hospitalization has been declining, but in the UK it has been rising, Chen Xi, an associate professor of public health at Yale University, told the Global Times.  “What China hopes to do is to curb the peak of the outbreaks and clear all the infections as soon as possible so it can make more preparations in terms of medical treatment and vaccines,” he said. 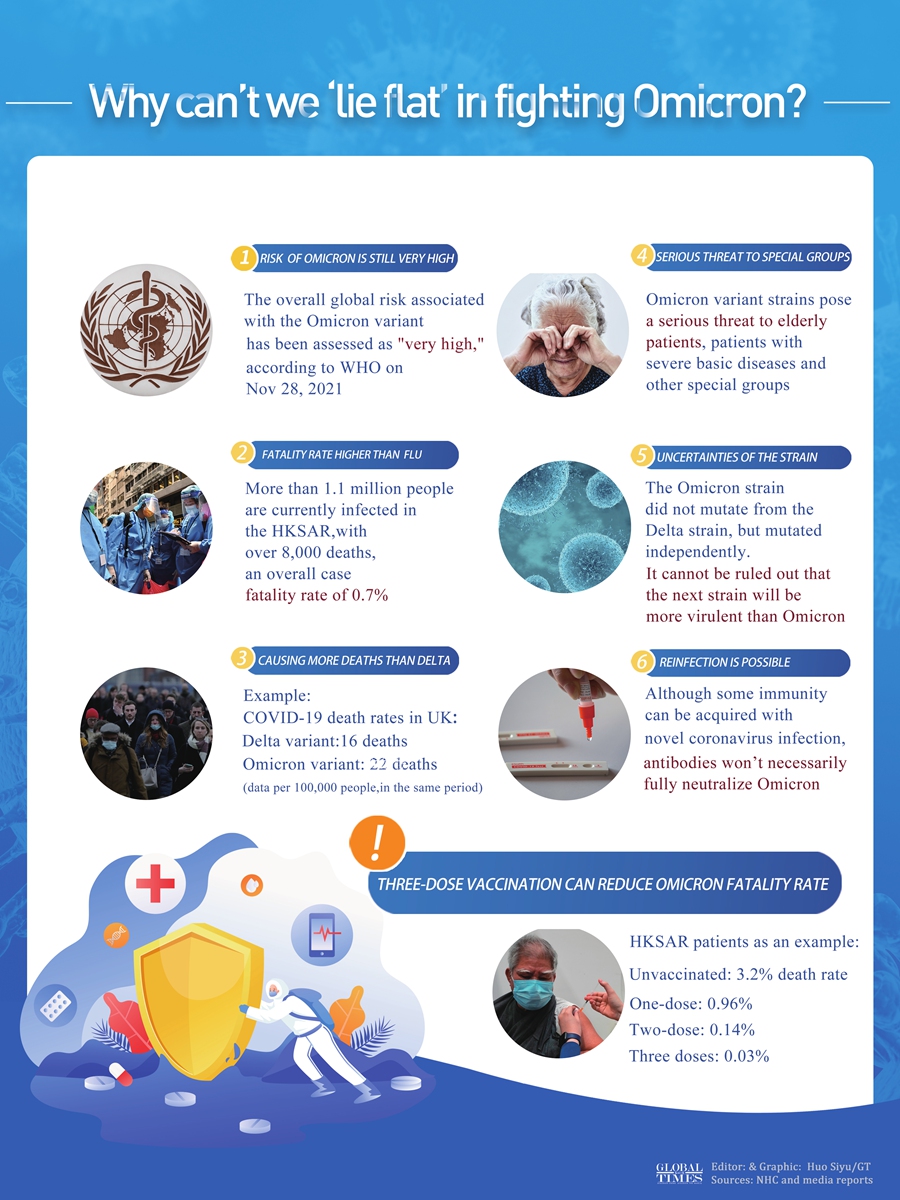 Why can’t we ‘lie flat’ in fighting Omicron? Graphic:Huo Siyu/GT

Epidemiologists pointed out that there are misconceptions widely circulating, such as relying on large scale infections to reach “herd immunity” and hoping that future variants will be less lethal than Omicron.

Lu Hongzhou, head of Shenzhen’s anti-epidemic expert team and head of the Third People’s Hospital of Shenzhen, told the Global Times that after a long-term study of recovered COVID-19 patients, his team discovered that 8 percent of them did not acquire neutralizing antibodies; and for those who did obtain them, the antibody titer drops rapidly, which disproves the feasibility of “herd immunity.”

Wu Fan, a leading expert with Shanghai’s COVID-19 medical team, said during a Sunday interview that the virus has qualities that have upended normal perceptions virologists have about viruses, such as rapid mutations and ability to evade immune systems. Whether the virus will become “milder” or “more lethal” remains unknown, thus it is important to stick to a dynamic zero-COVID policy for now.

Wu also said most evidence confirming that Omicron is less severe is from other countries, where the proportion of the population that acquired immunity differs from that of China. She further explained that most people in those countries obtained immunity through large scale infections, which also resulted in the loss of many lives. In addition, she said, most Westerners are vaccinated.

A total of 88.01 percent Chinese had received two jabs as of end of March, according to NHC data, but only half of those aged 80 years old are fully vaccinated.

Zhang Wenhong, who heads Shanghai’s expert panel on COVID-19, said during a Saturday interview that Omicron is not a “big seasonal flu”, and will severely impact unvaccinated elderly people. The current dynamic zero-COVID strategy is to allow all elderly people to get booster shots, and to give protection to the most vulnerable during the pandemic.

The false narrative of COVID-19 and its effects are still with us. “They clearly informed England’s recent ‘living with Covid’ plan for dropping masks, closures, testing, even viral surveillance from April, even though cases of the even more contagious BA.2 version of Omicron were already climbing,” Debora MacKenzie, a science journalist, wrote in The Guardian.

“China’s determination to stick to dynamic zero-COVID will not waver or be swayed by attacks or unfounded criticisms. The country will prove it can explore a way out of the pandemic, with minimal cost and sacrifices,” said Wang. 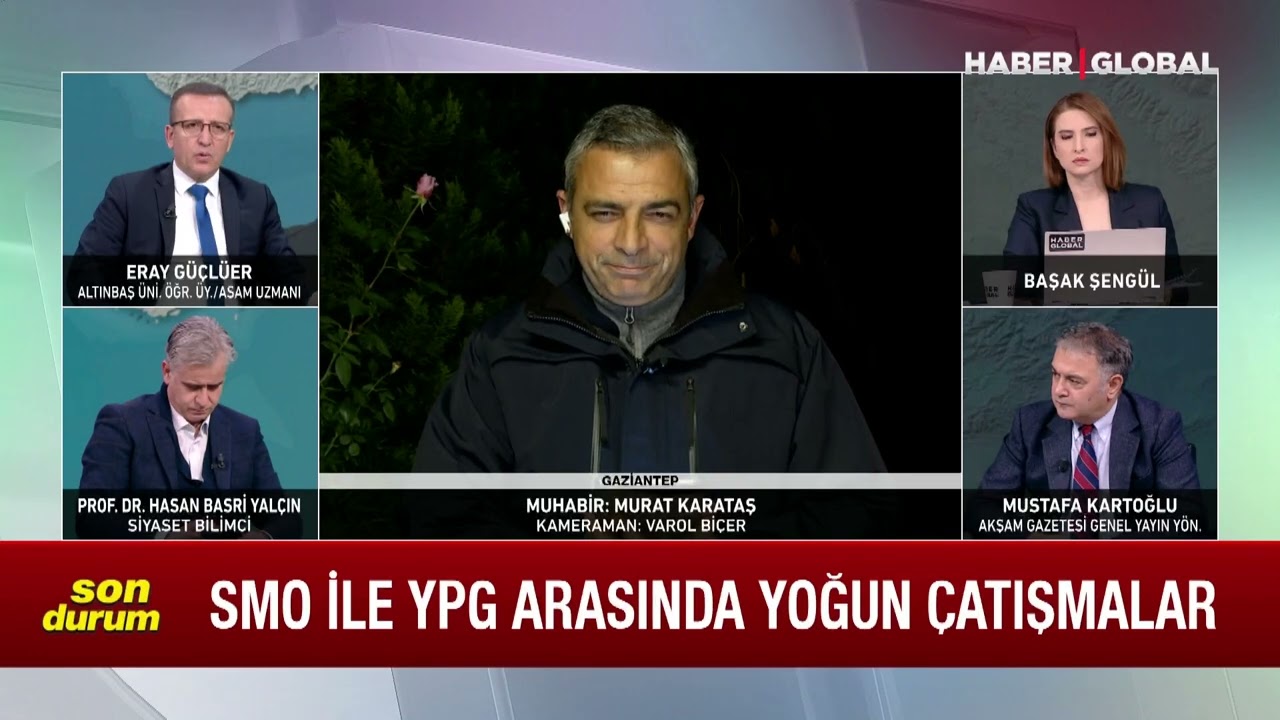